I (Steve) had the pleasure of spending a few days in Kyoto in early June following the WAGC in Sasebo. One of the things I managed was to visit a traditional Go salon. I had previously discovered that there was a go salon just around the corner from the hotel in which I was staying. 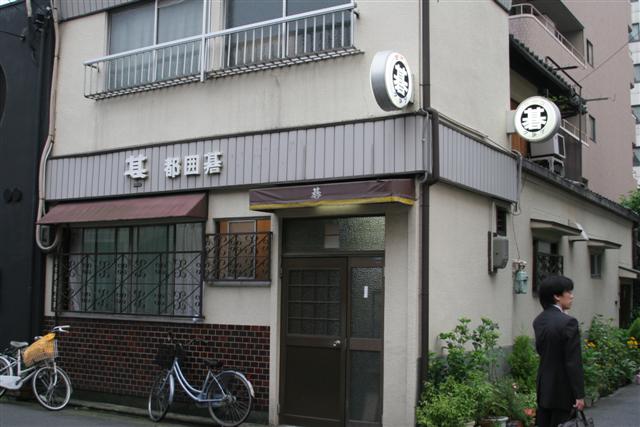 I visited there on two evenings. The first evening, only the owner was there – a small man in his 70’s (I would guess) dressed in traditional Japanese clothing. He greeted me, and asked me to sit down. Despite me not speaking any Japanese, and he not speaking any English, we established where I was from, and what strength I was.

We sat down at the board, and he brought out what looked like the oldest go stones in the world. They appeared to be worn down to about half their original size by constant use. A few minutes after we started our game, the owner open the sliding door behind him a crack, and barked something into the room behind. A few minutes later, his wife appeared with two cups of green tea, which we sipped for the remainder of our game. In the end, I won pretty comfortably.

On the second evening, I met up with Marco Silles, who I had been in contact with when I sent out my request for info on go salons in Kyoto. The photo below shows Marco playing one of the local members (with the owner in the background). This guy (whose name I don’t recall) was pretty strong – probably equivalent to a European 4 or 5 dan. Needless to say, we were both annilated pretty easily by him. 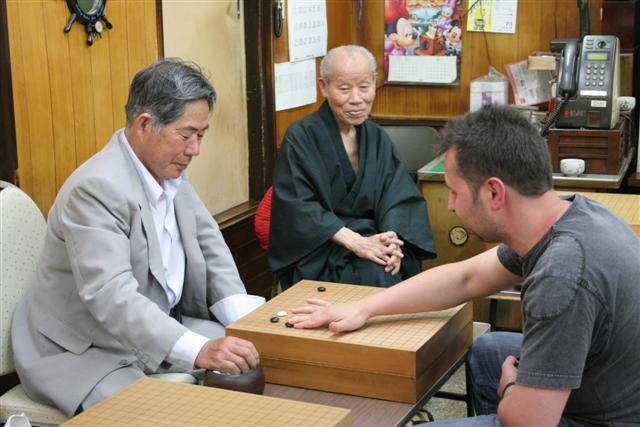 One of the intesting things about the go salon was the cost. In Japan, these are run as businesses, and you have to pay to play there. In this particular one (and it may be the same all over), you paid a fix fee to play there (500 yen, about â‚¬3.50), and then you paid for each game that you lost after that. That’s certainly one way to encourage you to get stronger!

Overall, a very enjoyable and interesting experience.Â  It’s wonderful to be able to participate in an activity where you do your talking through go, and don’t need to speak the same language to communicate.